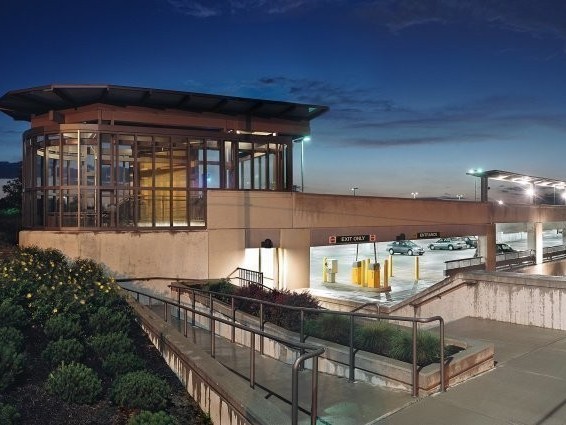 The existing campus aesthetic is a bold, cohesive example of concrete Brutalist architecture, popular in the mid-20th century. While such an aesthetic is quite appropriate for a garage, Champlin humanized the expression through the use of prominent glazed stair towers with translucent butterfly canopies and highly-visible glazed block elevator towers cloaked in NKU’s signature gold color. Safety and security, both actual and perceived, are of paramount importance, and both pedestrian and vehicular circulation were carefully considered. The stair and elevator towers anchor each end of the garage at Kenton Drive. Vehicular entrances occur at the middle level, intuitively leading to ramps up and down — allowing the garage to fill much more quickly and efficiently — especially during early morning and late afternoon rush hours. A pedestrian bridge spans across the busy drive, and is aligned with an existing collector sidewalk that feeds to and from the campus core.

Phase 2 will bring the ultimate vehicle count to 1,600.