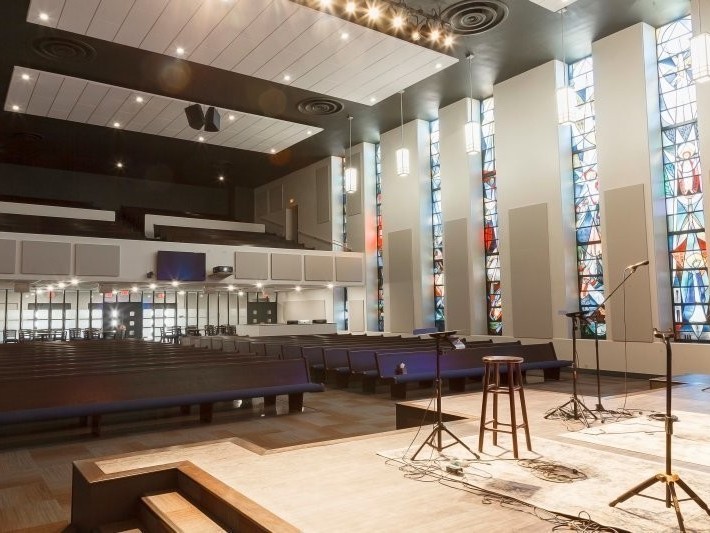 A relatively new church (founded in 2013), City Church is deeply committed to bringing spiritual, social, and cultural renewal to the city of Evansville. The church discovered an appropriate home in a former church facility in downtown Evansville, with Champlin providing design services to renovate this large structure to suit the nondenominational congregation. The church building is an austere 1940’s limestone edifice, relatively void of typical ecclesiastic iconography and ornament, in that it was originally constructed for an evangelical protestant assembly. Champlin merely proposed contemporary signage for the church tower, visible from the nearby expressway, as all the exterior work needed.

A non-traditional church, City Church is recognized for its friendliness — with a welcoming and casual demeanor. Church services are modern, involving music led by a contemporary band and a sermon that utilizes mixed media to present a culturally relevant gospel message.

Rebranded as “City Square”, the existing fellowship hall was significantly enhanced with new finishes, furnishings, and mobile coffee/juice station. The ceiling was left exposed, and painted a deep color to resemble a starlit, dusk sky. The space was better connected to the Worship Center through the use of large barn doors, which can be ceremoniously slid open at the end of services to encourage lingering and interaction among the congregation, and for use as a pre-function commons before special services.

An adjacent kitchen was left as-is, but large new accessible restrooms were strategically inserted to serve both the Square and Worship Center. Further, the existing education wing received vibrant new finishes and furniture for use by children and youth, branded as City Kids, City Students, and City Life Groups.

Champlin collaborated with Kinetic Church Design + Construction on this project.